A Quick and Easy Solution for Coating Aged Single-Ply Membranes 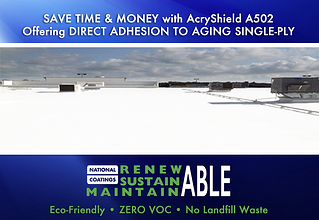 Single-Ply membranes are the most difficult roofing membrane to adhere to due to how they physically break down and the residue that remains. Most roof coatings require caustic primers, acid etching agents, or high VOC solvents that need to be rinsed off and sometimes collected for disposal, adding additional cost to a roof life extension project. National Coatings fortunately has a quick and easy solution for Single-Ply --- the AcryShield A502 base coat.  A502 allows for direct and tenacious adhesion to Single-Ply membranes without the need for a primer or etching rinse.

A502 was introduced by National Coatings Corporation in 2006 after three years of intensive research and successful installation, including both laboratory and actual in-service field testing. This coating was designed with self-priming characteristics that eliminate the need for additional primers or etching rinses while exhibiting a tenacious adhesion for thermoplastic and thermoset single-ply membranes, such as Hypalon, TPO and EPDM.  Previously, the only primers used for coating these membranes were solvent borne, which required warning labels, had very high VOC (volatile organic content) and required extreme care when applying to prevent fumes from entering the building.  The only other option for coating EPDM was a "prewash" or "rinseable primer" that had a very high, corrosive pH, so high that it would react with human skin oils, causing chemical burns.

The AcryShield A502 has three inherent advantages over the previously used primers:

AcryShield A502 has allowed National Coatings to be the only roof coating manufacturer with industry leading capabilities that successfully adhere directly to aged and failing single-ply membranes with a proven and verifiable 10-year track record. The next time a project calls for coating single-ply roofing membranes, the roofing contractor, consultant or specifier should request the AcryShield A502.