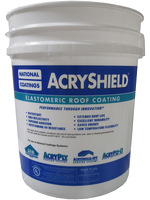 AcryShield A502 was introduced by National Coatings Corporation in 2006 after three years of intensive research, including both laboratory and actual in-service field testing.  The coating was designed to provide a primer/base coat to be applied to thermoplastic and thermoset single ply membranes, such as PVC, PIB, CPE, TPO and EPDM.  Previously, the only primers used for coating these membranes were solvent borne, which required warning labels, had very high VOC (volatile organic content) and required extreme care when applying to prevent fumes from entering the building.  The only other option for coating EPDM was a "prewash" or "rinseable primer" that had a very high, corrosive  pH, so high that it would react with human skin oils, causing chemical burns.

AcryShield A502 has three inherent advantages over the previously used primers:

The next time a project calls for coating single-ply roofing membranes, the roofing contractor, consultant or specifier should demand National Coatings Corporation AcryShield A502.

Contractors – Do you need to Save Time and Money for your Roofing Company to be Profitable? 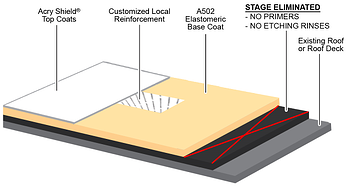 National Coatings has a roof coating that allows for direct adhesion to hard to coat single-ply surfaces such as TPO, EPDM and Hypalon. The AcryShield A502 base coat is a high performance elastomeric, ultra low VOC, water-borne base coat. This roof coating is ideal for lowering project cost and promoting higher job efficiencies for your roofing company.

Contractors are able to save money and time using the AcryShield A502 base coat by eliminating the following steps:

We offer two different single-ply roofing systems that use the AcryShield A502 base coat. The AcryShield Roof Management (ARM) System is ideal for roof maintenance and the AcryPly All Acrylic Roofing System is ideal for restoring older roofs that have additional aging issues. These systems are excellent for your roofing company because they are easy to install, as they are spray applied. This allows you to cover seams, equipment joints, pipes, etc… creating a seamless, watertight membrane that is custom tailored to meet the specific needs of your clients’ roof. Additionally, these systems are available with a 10, 15 or 20-year warranty.

In past years there have been multiple tests conducted and data captured to determine whether a Cool Roof System using roof coatings is an energy efficient flat roof solution. The simple answer is – YES, absolutely!

In June 2010, Professional Roofing Magazine published an article that compared two rooftops - one a Cool Roof and the other a black EPDM roof. These two roofs were located next to each other in the same corporate plaza with identical weather conditions, building height and construction.  The lead estimator who conducted the test determined the following information to be true:

The overall outcome of the test determined that Cool Roof Coating Systems provide an excellent choice when wanting an energy efficient flat roof solution.  The 8 degree difference in internal temperature is large in terms of energy usage needed to cool the building. Thus, the Cool Roof Coating System allows you to save a great amount of cost in electricity required to lower the temperature inside the building.

You can also check out the Harbor Freight Tools project, which National Coatings completed. They were very pleased with the outcome of the energy efficiency and truly believe it was the ideal flat roof solution for their leaking and aged roof.  "After the National Coatings' Cool Roof was installed we definitely noticed a difference in building temperature. It's not a marginal difference, either. It is between 15-20 degrees cooler inside the warehouse and store." - Jerry Moore, Facilities Director at Harbor Freight Tools

Previous Page All posts Next Page